Recently, a new beast has taken the internet by storm with its venomous sting and humongous size – the Murder hornet.

The terror of these large insects is constantly rising in the U.S. and it all started when a group of entomologists (scientists who study insects) tracked them with the help of a tracking device and found a nest.

But what are Murder hornets and why are they so terrifying?

Popularly known as the Asian giant hornet, Murder hornets are the largest species of hornet known to the world. The queens can grow as huge as over 2 inches, which is almost double the size of a regular European hornet.

The unnerving name of these giant wasps is inspired by the immense devastation they cause to their prey. Primarily, they are a threat to colony-living insects such as honeybees and beetles, but when it comes to humans, the sting of a Murder hornet is not something one can easily forget. They can even sting through a normal beekeeper suit and once stung by these hornets, the pain will be immensely excruciating as they transfer seven times the amount of venom as compared to a honey bee.

Moreover, unlike a normal bee who dies after a single sting, these wasps can sting repeatedly, and though it’s rare for them to bite a human, if a person is allergic to their venom and is stung by multiple Murder hornets, it can be fatal. But usually, they hunt other wasps and honeybees.

It’s not that the Asian giant hornets are completely carnivorous. They can easily survive on tree sap but that’s not what they prefer ideally. It is said that a single group of these deadly hornets has the potential to wipe out an entire beehive containing thousands of honeybees within a matter of few hours. They rip out the heads of the bees and even take some of the kills to feed their young ones!

Fortunately, the first nest of Murder hornets in the U.S. has been successfully removed by scientists. It was sucked out of a tree by using a vacuum hose. Buts that’s not it! Another nest with about 200 of these insects was found in the city of Blaine near the Canadian border which has created a significant ‘buzz’ amidst the locals.

Although Asian giant hornets can be dangerous for humans, they pose a greater threat to agriculture in North America. This is because honeybees play a pivotal role in pollinating different crops such as berries and apples. Their population is already a matter of worry as it is declining due to various diseases and pesticides. 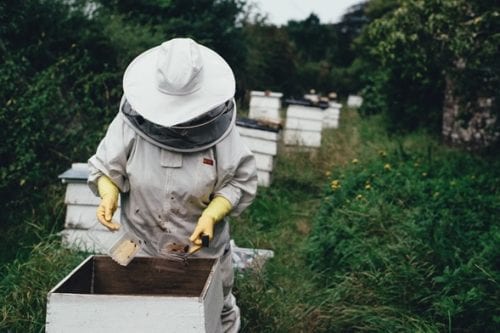 Since just a few dozens of these gigantic beasts can clear our hives and hives of bees at a time, their presence can really have some serious and long-lasting effects. It can be especially devastating for the beekeeping industry and honey producers.

As mentioned before, Murder hornets are quite huge when compared to other wasp species. They can measure anywhere between 3.5 to 5.5 cm. There are some other characteristics that might help you identify them. 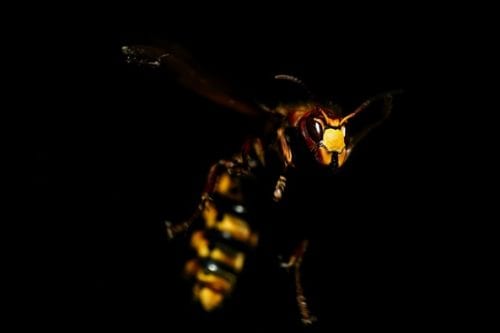 Typically, the head of this hornet is a lighter hue of orange and yellow and has brown antennae with a similar color base. The most distinguishing feature of this beast is its large cheeks and orange mandibles. The color of its eyes ranges from dark brown to black. Additionally, their abdominal area has yellow and brown stripes.

These features are quite similar to the appearance of the Eastern Cicada killer or the European hornet. That’s why unless you are an expert, it’s very hard to distinguish them.

To protect yourself from a stinging attack of such hornets, you can follow these steps:

When found in large numbers, Murder hornets are extremely difficult to control. But there are some ways that are used in apiculture to minimize the damage caused, such as covering the beehives with netting or wire net screens.

Other ways that help to eradicate them is by nest removal or by applying poisons. Controlled fires are also a possible method to control these insects before they attack. Even with all this, it’s best if you contact a pest control service to prevent any accident or mishappening.

What to do if you are stung?

In case you find a nest

Do not disturb it in any way or try to remove it on your own. This can cause the insects to attack you, sometimes in large numbers. Contact an authorized person or a pest control service who will assist you with the right equipment and expertise.

You may also like this: How to Get Rid of Fruit Flies in Your House

Subscribe to our newsletter to get latest essential products update

We use cookies on our website to give you the most relevant experience by remembering your preferences and repeat visits. By clicking “Accept”, you consent to the use of ALL the cookies.
Cookie settingsACCEPT
Manage consent

Any cookies that may not be particularly necessary for the website to function and is used specifically to collect user personal data via analytics, ads, other embedded contents are termed as non-necessary cookies. It is mandatory to procure user consent prior to running these cookies on your website.